Claim Up To £855 Reward when buying an additional Canon Lens

The Devil is in the Detail
From the darkest shadow to the brightest highlight, a 30-megapixel CMOS sensor captures fine detail even in the toughest conditions, with a maximum native sensitivity of ISO 32,000. Shoot Dual Pixel RAW files for post-production adjustments like you’ve never seen before.

Precision as Standard
Stay focused, with an expanded 61-point AF system that tracks even the most erratic subjects, and that can be customised to every situation. Accurate exposures come from a metering system so advanced it has its own 150,000-pixel RGB+IR sensor. Anti-flicker technology combats variations in brightness under artificial lighting.

Engineered to Perform
In pursuit of the perfect moment, the Canon EOS 5D Mk IV Body can shoot continuously at 7fps. Its viewfinder and user interface are highly customisable, with intuitive touch-screen operation offering new levels of camera control. Add weather-proof sealing and you have a DSLR that’s at home in just about any environment you can think of.

Step Up to Cinematic 4K
Following in the footsteps of its predecessors, the Canon EOS 5D Mk IV Body once again offers DSLR movie makers new ways in which to be creative. Capture 4K footage at 30fps, from which 8-megapixel still images can be extracted as JPEG files. Or explore different timescales with 120 fps HD video for slow-motion effects and built-in timer facilities for time-lapse movies. Dual Pixel CMOS AF allows continuous focusing – lock on to moving objects with just a tap of the camera’s (or your smartphone’s) touch screen.

Stay Connected
There’s other data in the EOS 5D MARK IV’s files too. Built-in GPS tags images with your location as you shoot them. IPTC metadata can also be embedded. With in-camera RAW processing it’s easy to produce client-ready JPEGs, and Wi-Fi and NFC connectivity makes it simple to send or share them, using either FTP/FTPS networking facilities or your smartphone. 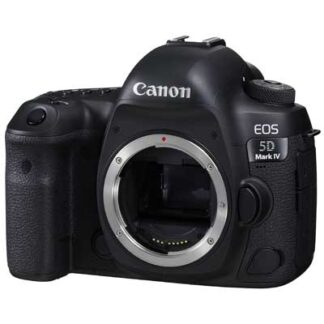