The Fuji X-H2S is a new flagship model boasting the highest performance in both stills and videos in the history of the X Series.

The X-H2S features an evolved AF system capable of shooting up to 40 frames per second and offering newly developed subject-recognition AF technology and can even film 6.2K/30P and 4K/120P video.

Other features include the five-axis in-body image stabilisation that offers up to 7.0-stop advantage, highly robust magnesium body, hardware that incorporates operability improved from the previous model, as well as extensive interface options including the new slot for a CFexpressTM Type B card and an optional file transmitter (sold separately).

The new camera caters to the diverse photographic needs of professional photographers and videographers in both stills and videos in categories including sports photography, bird photography and single-person on-location work.

1. Best capability to track a moving subject in the history of the X Series to capture decisive photo opportunities

The camera is equipped with a back-illuminated stacked-layer 26.16MP “X-TransTM CMOS 5 HS” sensor, the 5th generation of X Series’ image sensors. It has signal readout speed about 4 times faster than the current model to achieve blackout-free continuous shooting of up to 40 frames per second. The camera controls phase-detection pixels independently from image display during the burst mode. This triples the number of calculations in phase detection information from the current model, and enables high-speed focusing even during high-speed continuous shooting of 40 frames per second, thereby significantly improving AF accuracy in the burst mode.

The use of the new sensor and the processor is coupled with an increased built-in memory capacity to dramatically increase the number of frames that can be continuously recorded in the burst mode. When using the electronic shutter, the camera can shoot over 1,000 frames continuously at up to 30fps in JPEG and 20fps in RAW.

The EVF uses a high-resolution 5.76-million-dot panel with the magnification of 0.8x. The smooth viewfinder with the frame rate of approx. 120fps also offers improved visibility thanks to strong suppression of parallax and distortion that occur when an eye position becomes displaced while using the viewfinder, thereby enabling accurate tracking of subject movements.

2. Substantially-evolved AF performance with the use of new devices and enhanced algorithm

The use of the new devices and improved prediction algorithm for AF have led to a major boost in the camera’s capability to track a moving subject and autofocus accurately in Zone AF or in low-contrast conditions. This means a subject that keeps on moving can be accurately tracked, such as athletes and wild animals.

The new image processor features a subject-detection AF function, developed with Deep Learning technology. It detects and automatically tracks not only the human face / eyes but also animals, birds, cars, motorcycles, bicycles, airplanes and trains to maintain autofocus. Users can concentrate on shutter opportunities and framing, as the camera can keep a targeted subject in focus constantly.

The use of the new sensor / new processor has enabled saving 4:2:2 10bit video at 6.2K/30P internally, recording high-definition video while retaining extensive color information. The camera also supports filming high-speed 4K/120P video so that a momentary action of a fast-moving subject can be presented in smooth slow-motion with fine details.

The sensor`s readout speed during video recording has been reduced to as fast as 1/180 seconds. The rolling-shutter effect is well-controlled to present a moving subject naturally.

AF performance for video recording has been enhanced. The camera supports the AF+MF function in the video mode, and offers the subject-detection AF function also during video filming, tracking a fast-moving subject in both stills and videos.

Another new feature is F-Log2 capability with dynamic range expanded up to 14+ stops. The greater dynamic range than the current F-log broadens post-production potential.

To cater to the needs of professional photographers, the camera has a new heat-dissipating structure to substantially increase the maximum video-recording time and enable recording 240 minutes of 4K/60P video. Attach the optional cooling fan “FAN-001” to enable extended video recording even in high-temperature conditions.

The camera features an all-new five-axis in-body image stabilization mechanism, which offers up to 7.0-stop advantage thanks to the new processor and a new sensing control function. Users can comfortably choose to hand-hold the camera to shoot active situations such as sports or in low light conditions such as nightscape.

The new camera inherits the popular design features of the X-H1, such as a large grip that works well with large lenses, an LCD display on the top panel for users to check settings any time, and highly robust camera body that withstands heavy professional use. Furthermore, user feedback has been reflected to bring more improvement in operability:

The shutter button’s operational feel has been adjusted to improve its operability when it is half-pressed, helping

users release the shutter exactly as they intend.

The design of the large grip, one of X-H1’s popular features, has been brushed up to make it even easier to hold when using a longer or large-aperture lens.

A standalone video-recording button has been added for enhanced video operability in combination with the 1.62-million-dot vari-angle LCD monitor.

Compared to previous models, the new camera offers improved operability with its buttons and dials, e.g. improved button materials and load adjustment to the AF ON button, so that users can handle the camera exactly as they intend.

Shutter durability has been further improved, withstanding 500,000 actuations in the company’s test.

There are no reviews yet.

Be the first to review “Fuji X-H2S Body” Cancel reply 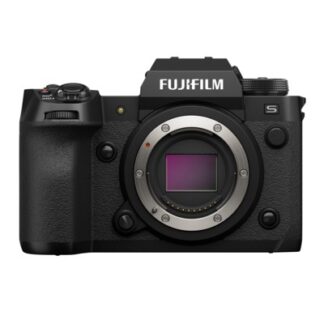